You've probably noticed it, but we live in an increasingly virtual world. Over 90% of organizations today consider themselves "virtual workplaces" -- meaning that they deploy tools and technologies to enable employees to collaborate across distributed geographies.

Presence in the anywhere office

If you're in Dallas, your manager is in Denver, and your teammates are in Detroit, you're a virtual worker, and this has become increasingly common. In fact, we're reaching the point where it makes sense to refer to the "anywhere office" -- employees are increasingly able to work from anywhere, even outside the confines of traditional offices. Nemertes recognizes seven distinct categories of anywhere office workers.

These employees have more in common than the lack of traditional office space. Many have nontraditional or unconventional "desktops" (working primarily from wireless devices, for example). And they also tend to be increasingly isolated, making it critical to supply these employees with the information and communication they need to function effectively.

Presence is one of the key technologies that enable these far-flung workers to feel (and be) connected to the rest of the organization. With presence, employees can quickly locate resources and colleagues, get questions answered, and respond to client requests. But enabling presence for the distributed workforce isn't quite the same as doing so for its deskbound counterparts.

For distributed workers, one of the most critical elements is integrating mobility into the presence architecture. Yet this is an area in which vendors have made woefully slow progress. The operating assumption behind most presence engines (particularly those from messaging providers such as Microsoft and Lotus) is that most users have a "desktop." This is a huge mistake.

In fact, we're at the beginning of a trend that's going to fundamentally reshape the concepts of desktop and mobile computing: the distinction between a "smartphone" and a "mobile-enabled computer" is rapidly blurring, to the point where in a few years it will be meaningless. (Already, today, a VoIP-enabled netbook is simply a smartphone, and a BlackBerry or iPhone with application support is essentially a netbook.)

But the fault isn't entirely that of messaging vendors. Wireless and mobility providers are also falling behind -- they're not offering off-the-shelf integration for their devices into enterprise presence solutions.

For example, the mobile telephony provider's answer to instant messaging is SMS -- which is essentially messaging without the presence capability. (Mobile texting provides no indication of whether the intended recipient is reachable or not.) The fact that SMS isn't presence-enabled is a top indicator that mobile providers don't understand presence.

What's an enterprise IT architect to do? In the absence of a solution that integrates mobile devices seamlessly into a presence engine, a few steps are nonetheless worth taking: 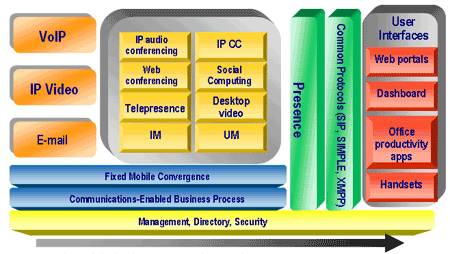