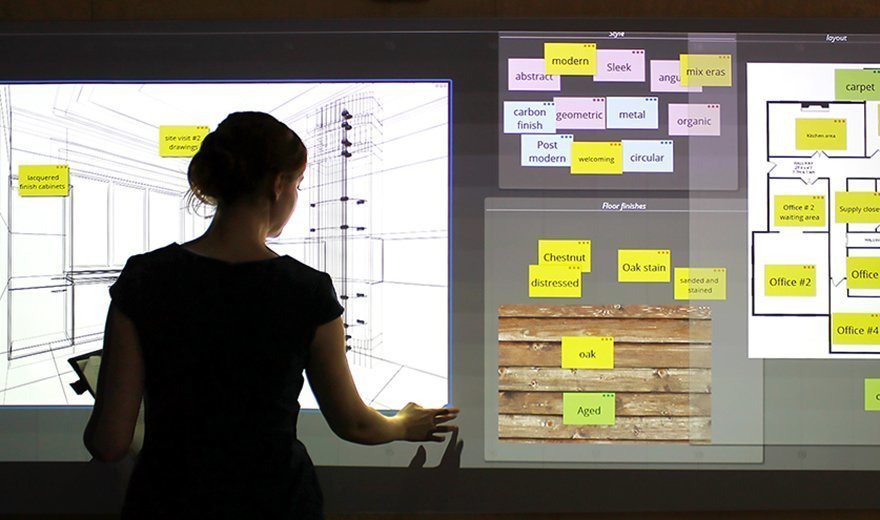 Nureva then wondered: How could digital sticky notes on a large virtual canvas benefit the collaboration process? With that, Nureva Span was born.

Nureva's ideation management system features wall-mounted panoramic projectors that cast images and other content onto a wall. A touch module, mounted below the projector, floods infrared light onto the wall so users can move the images on the wall with their fingertips.

While some flat-panel displays have infinite whiteboard canvases, Knowlton said users can lose their work in that type of environment as they swipe an image off screen and start drawing another.

"We like bigness but try to constrain it so people have an understanding of where they are," said Knowlton, who co-founded SMART Technologies, a company that makes interactive whiteboards.

Nureva couples its hardware with cloud-based software so remote users can share their ideas to the virtual canvas via their personal devices in real time or asynchronously. Users can upload digital sticky notes, photos, sketches and other marked-up images.

Typically, like other immersive collaboration workspaces that aim to organize brainstorming sessions, Nureva's customers include product design companies and architectural firms. Knowlton said Nureva hasn't yet found a limit to the number of users that can be included in an ideation session, although the company has had between 40 and 50 users at one time.

"The real problem these applications solve is brain dumps," he said, "when you're trying to collaborate in a group and people are throwing ideas over the wall."