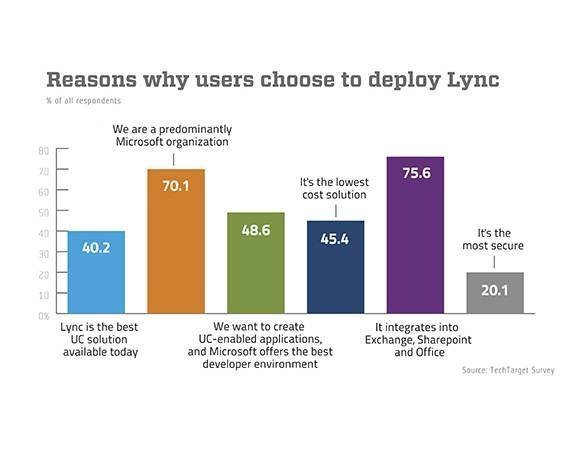 Another question focused on why companies chose to deploy Lync, and the responses highlighted some bad news for competing solution providers. The top response was that it integrated into Exchange, SharePoint and Office. The second most common response was that users were predominantly a Microsoft organization, and the third highest response was that customers want to use Lync as a development tool for UC apps. Further down the list were reasons such as Lync being lower-cost or it actually being a better solution. The good news for competing vendors is that, by and large, Lync isn't perceived as having a better TCO, nor is it considered the best technology, and it's familiarity with the "big M" that drives sales. The bad news for the competition is that Microsoft has a monopoly-like share with Exchange, SharePoint and Office. That means displacing Lync as a UC vendor might be difficult no matter how much better or cost-effective another solution is. This could be problematic for organizations that have already started a UC deployment from another vendor such as Cisco or Avaya.