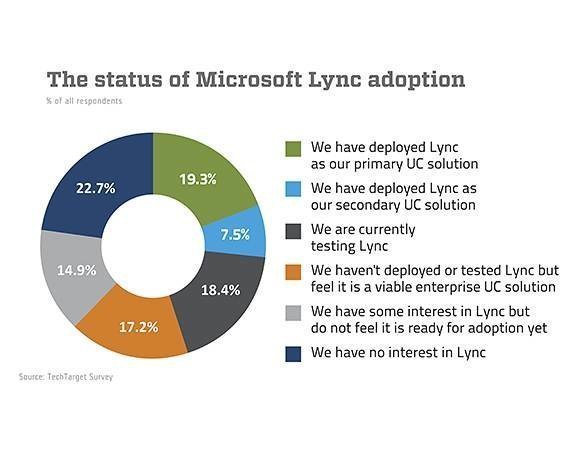 The Fall 2012 unified communication survey asked, "What is the status of Microsoft Lync adoption in your organization?" Of the 348 respondents, nearly 27% claimed to be using it in production environments (19.3% used Lync primarily, and 7.5% secondarily). Another 18.4% were currently testing Lync functionality in a lab, while another 17.2% had the opinion that Lync is a viable solution but they had no plans to date. On the opposing end, 14.9% of skeptical respondents felt that Lync wasn't ready for adoption yet. The last 22.7% of responders had no interest in Lync. While the combined 27% seemed a little high to me, the survey didn't actually specify the definition of UC (e.g., voice, conferencing, video, chat, presence, etc.). I know a number of organizations have deployed Lync for chat and presence only, and this could be considered UC depending on where the organization is in deployment. The main point, though, is that more companies feel that Lync is ready for production environments, and whether it's for just chat and presence or the whole UC kit and caboodle, Lync is coming.