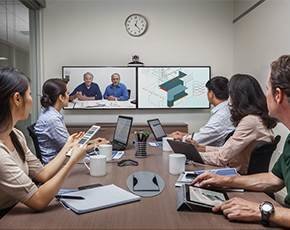 Polycom made the largest announcement in its 22-year history: an end-to-end upgrade of its entire portfolio. The most notable releases included:

Polycom's focus on interoperability, scalability and collaboration indicates the company may be evolving from its video conferencing roots to the more comprehensive unified communications (UC) market.

"Polycom is in a good position in the video market. Now they're looking at the whole future of UC," said Henry Dewing, principal analyst at Forrester.

Yet moving from the video conferencing market into UC will take much more effort. While Polycom's latest announcement aligns more with a UC vision, Polycom's Senior Vice President of Marketing Jim Kruger said, "We don't have call control; we don't have a PBX, and that's one of the criteria that Gartner uses [to define unified communications]."

"My take is that Polycom moved away from trying to position itself as the 'UC core' with its change of marketing stance last year, when it started talking about being a 'software company,'" Gartner's Scott Morrison said.

"Polycom is very much focused on the conferencing component of UC. It has no solution for standalone telephony, voicemail or email, and its presence and IM features would generally end up co-existing with other platforms," he said.

So rather than moving into the UC market, Polycom appears to be keeping up with the demands imposed on video-conference technology.

For the past 18 months, the video-conferencing industry has tried to keep up with SaaS, UC, and the cloud, according to Ira Weinstein, Wainhouse Research senior analyst. "And it's not a Polycom problem; it's an industry-wide problem," he said.

In the end, video vendors that introduce unified communication and cloud features are not preparing for a market switch; they are merely adapting to the UC market in order to survive.