Editor's note: Video conferencing adoption is growing, and IT departments must install and integrate the technology to their best advantage. Whether it's room-based video conferencing, desktop video conferencing, TelePresence or a combination, this Expert Lesson will guide you through the decision matrix to choose the best solution for your business needs and technical environment. It will also cover how to evaluate your network needs, technical requirements you may be overlooking, and how to ensure interoperability with partner and client systems.

Don't miss the rest of this Expert Lesson on video conferencing:

No area of unified communications (UC) has received as much attention from both vendors and enterprises in the last couple of years as video conferencing. Video conferencing adoption is increasing in response to three converging trends:

The goal of this Expert Lesson is to guide IT leaders through the video decision process. We'll discuss the physical components of video conferencing systems, interoperability and standards considerations, and how organizations should address video management to ensure quality of service (QoS) for what's sure to be a costly IT investment, but one with a high potential for return on investment (ROI). 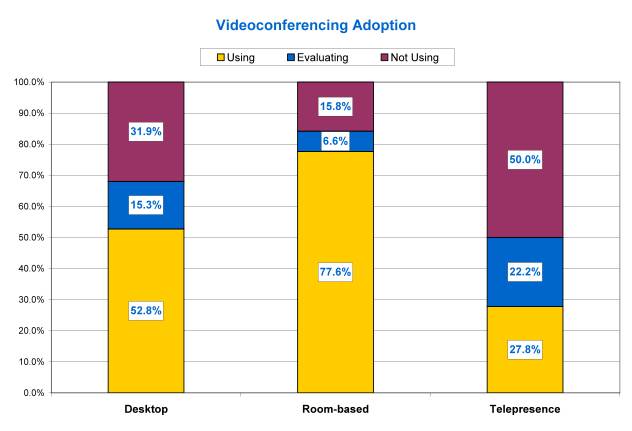 As the chart shows, more than half of research participants are deploying or planning to deploy telepresence. Typical deployments are limited -- only a handful of rooms in large office locations. But with the mean capital cost of a telepresence room deployment hovering between $250,000 and $300,000, plus ongoing costs for bandwidth and management, how can organizations justify such an expense, especially in light of flat or shrinking IT budgets?

The answer is simply that executives perceive a great deal of value in meeting via telepresence versus room-based, desktop video or audio conferences. Telepresence, unlike other meeting technologies, is perceived as a suitable replacement for in-person meetings. Telepresence's popularity is due largely to the immersive "virtual reality" nature of the technology. Telepresence reduces awareness of the video conferencing systems, enabling participants to focus on one another.

Distributed workers are more likely to use room-based, desktop or some combination of video conferencing systems simply to provide for more effective meetings with remote staff. Video, in these cases, provides a higher form of social interaction that captures verbal and non-verbal communications while reducing the amount of multitasking that often takes place during voice-only calls. Managers often drive video conferencing adoption.

Should you lease or buy video conferencing equipment?

What factors should drive your enterprise video conferencing strategy?

How can we improve video conferencing security to protect our sensitive data?

What does video conferencing mean for the network? John Bartlett weighs in

"I want to know that the person I'm speaking to is focusing on me and not checking email or surfing the Web," said an IT manager for a large media company.

There are a couple of reasons for the pushback. First, the quality of desktop video, though improving, typically isn't nearly as good as telepresence or room-based video conferencing systems, meaning that the business case for using video to replace in-person travel doesn't apply as well to the desktop.

IT managers often tell us that poor-quality desktop video is perceived as an obstacle rather than a boon to collaboration. It doesn't take more than a few poor-quality video conferences to turn users off the technology. Managing desktop video quality is a significant challenge, given the need to integrate support services for desktop applications with those for the network. A poorly performing desktop video application could be the result of contention for PC resources rather than a network issue.

IT decision makers also say they are concerned about privacy and cultural implications related to the use of video, especially for organizations with significant populations of at-home workers who do not like the idea of having to prep themselves for a video call. Several participants also say their prohibition of Web cameras for security purposes ultimately blocks the use of desktop video conferencing. One IT manager for a global manufacturing firm told us that his company prohibits the use of webcams within cubicles for security and privacy purposes, meaning that desktop video conferencing within his organization is a non-starter.

Despite these challenges, we continue to see a slow but steady uptick in interest in desktop video, especially as video clients become ubiquitous and organizations adopt UC dashboards, such as IBM Lotus Sametime and Microsoft Office Communicator, with an embedded desktop video client.

Looking ahead, there are no signs of video conferencing adoption slowing. In fact, organizations often cite video conferencing among services that "survive the cut" as IT budgets are scaled back because of the recession. Indeed, for all the aforementioned reasons -- improved collaboration capabilities, reduced travel, falling system costs and demonstrable business value -- deployment of video conferencing systems will continue to grow.

About the author:
Katherine Trost is a research analyst with Nemertes Research, where she focuses primarily on managed and professional services. She develops and manages research projects, conducts strategic seminars, and advises enterprises, vendors, resellers and service providers. Katherine's primary areas of expertise include hosted, managed and professional IT services, as well as channel strategies. Her secondary areas include contact centers, UC trends, enterprise and SMB organizational best practices, and branch-office strategies.