Microsoft’s collaboration story is pretty muddled. The unified communications vendor has several applications with overlapping features: Skype for Business, Microsoft Teams, Yammer, Office 365 Groups and even Outlook all handle varying degrees of collaboration. Of all these products, Skype for Business and Microsoft Teams are perhaps the two most ripe for consolidation.

Right now, the two products are separate entities that complement each other, said Irwin Lazar, an analyst with Nemertes Research, a tech advisory firm based in Mokena, Ill.

“In the longer term, I think you’ll see Teams take the place of Skype for Business,” he said. “If I were a company looking at rolling out Teams and supporting Skype for Business, I might hold off until Microsoft does the inevitable conversion of those two products.” 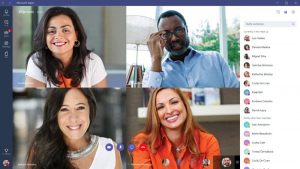 Skype for Business offers both on-premises and cloud products as well as a hybrid option. Microsoft Teams is a newer cloud-based, messaging-centric collaboration app. Both products are part of Office 365 and feature messaging, presence, and voice and video communications. However, Skype for Business has additional features including PSTN calling and conferencing.

Microsoft, like many other vendors, is prioritizing development of cloud services rather than focusing on premises-based products.

Additionally, team applications are becoming the next UC client, Lazar said. For example, while Cisco still supports its collaboration service Jabber, the vendor is pushing new development into its Spark product. RingCentral, too, recently revamped its UC product based on its acquisition of the team collaboration tool Glip.

When compared to Microsoft, other UC vendors — including Cisco, RingCentral, Mitel and BroadSoft — have more harmonized products that converge team messaging and UC. Microsoft is probably a year away from having that kind of harmony, Lazar said.

“They still have work to do to improve the overall user experience, and making team chat fundamental to what they’re doing,” Lazar said. “But, in the mid- to large-size market, they’re still the ones to beat.”

Looking for a clear roadmap

“It seems reasonable Microsoft might double-down on Teams as it is new, home-grown, built for Office 365 and appears to be on the fast track,” Michels wrote. “I expect Skype for Business will see a few more incremental improvements . . . but I don’t expect any big innovations in 2017.”