Microsoft executive Michael Angiulo had a thought: If a couple teenagers in separate parts of the country, or world, can connect in a minute or two and talk, look at and play a video game together, then why can’t a corporate meeting be cobbled together just as easily? Why, he mulled, does a video conference take several minutes to start? If setting up a meeting is so simple with a video game console, like an Xbox, why isn’t there an equivalent device that can be used to connect workers in a corporate setting?

And with that premise, the Microsoft Surface Hub was born.

Angiulo, corporate vice president of Microsoft’s Devices Group and an executive in the company’s Xbox hardware division, looked at how meetings came together in the video game console world. He and other Microsoft executives sought to enhance that experience — for commercial customers — but first Microsoft had to determine what technology was needed from a hardware and software standpoint.

In a nutshell, the Surface Hub, announced earlier this year, is a slab of hardware loaded with Microsoft software. The large-screen collaboration device features ink and touch technology, digital whiteboard with infinite canvas and conferencing capabilities. 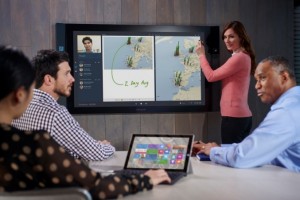 The device includes Windows 10 and its Web browser Microsoft Edge, universal Windows apps, as well as Microsoft Office apps like Word, Excel, PowerPoint, OneNote and Skype for Business. Microsoft is touting the product as an all-in-one collaboration device that could replace companies’ vast assortment of conference room equipment.

Whether that will happen or not is yet to be seen, but one thing is already clear: If anything, the nexus between the Xbox and Surface Hub is another testament to the power of consumer electronics and how their ease of use has influenced business communications development.

Case in point, said Brian Eskridge, a senior manager on the Surface Hub team, is the Chicago law firm of Bartlit Beck Herman Palenchar & Scott LLP, a member of Microsoft’s customer advisory council exploring how communications can be improved.  As one would expect, the firm envisions using the Surface Hub’s large-screen format to review and collaborate on documents and other files in its corporate office. But additionally, in perhaps a more non-traditional use case of the device, the law firm could use the Surface Hub in a courtroom setting by displaying and annotating video and still images to highlight significant pieces of evidence to a jury or judge.

“That courtroom is still a meeting,” Eskridge said. “It’s a place where people convene to review data in real time and make decisions quickly based on access to data.”

Courtrooms in particular can be rife with antiquated projectors, CRT monitors and VHS players on carts, Eskridge added, and the Surface Hub could replace this aging equipment. He said conference room equipment has lacked significant innovation and evolution in the past 20 years, which has presented a market opportunity among millions of collaborative spaces and rooms worldwide.

SHoP Architects in New York and Case Western Reserve University in Cleveland have also been evaluating the product.

Three years ago, Microsoft introduced Surface tablets and in the meantime it has been building out its resale partner channel. For the Surface Hub, the vendor is also trying to shore up its channel of system integrators and conference room audio/video resellers to market the unique large-screen device, priced at $20,000 for the 84-inch model and $7,000 for the 55-inch version.

Eskridge said the Surface Hub, like other conference room equipment, could fall under a company’s real estate and facilities budget rather than the IT budget.

“It’s important to set those price figures in context to help think about what’s the alternative for our commercial customers today,” Eskridge said, adding that traditional conference room equipment — including audio/video systems, projectors, whiteboards, teleconferencing and digital displays — could cost about $40,000. Additionally, he said, Surface Hub cost savings could be realized over time as service and support for the device can be done remotely.

Even if they haven’t seen a device quite like the Surface Hub before, analysts seem generally upbeat about the product.

“I like the idea of creating a more immersive conference room experience,” Alan Lepofsky, an analyst at Constellation Research, told TechTarget earlier this year. “It’s interesting in a time where many things are getting smaller, more mobile, even wearable, the massive experience of a Surface Hub is a welcome contradiction.”